The world is a narrow bridge. The key to the crossing is not to be afraid. — Nachman of Bratslav

Five weeks. Five lifetimes. There’s hardly any time to process a day’s events, and each new day brings more shocking events. In the five weeks since the last (our first!) newsletter, we’ve gone from White House coronavirus press conferences with Dr. Fauci to no conferences and no Fauci as states begin to reopen. We’ve witnessed an inspiring uprising for Black lives following the murders of George Floyd, Breonna Taylor, and Ahmaud Arbery, and horrifying police brutality in cities across the country. All this, and more, has happened in the span of five weeks, not five lifetimes.

For some of us, this feels all too familiar. For some of us, we may want to hide from it all, hoping it will miraculously, and without effort, change for the better. But we know the world doesn’t work that way. We may not be able to change the entire world but we can, collectively, change New York and Long Island for the better. This newsletter describes some of the ways that Bend the Arc: Jewish Action Long Island is working toward just that.

Juneteenth Unity March
WHEN: Friday, June 19, 6PM
WHERE: March begins at Amityville Memorial High School
WHAT: This march is to signify unity for the message that Black lives matter. It is Black led and organized by a high school student. Bend the Arc: Jewish Action Long Island is proud to be a co-sponsor.

Both are running to represent NY-3. Each discussed their platforms with the members in attendance and answered their questions. Among the topics discussed were criminal justice reform, immigration, and the fight against white nationalism.

Building Our Power Base

Our May Community Meeting was an important step in building power and visibility for Bend the Arc Long Island. As we move forward in the 2020 electoral cycle, we will be coordinating directly with Congressional campaigns as an organized Bend the Arc presence. This approach benefits both the candidate and Bend the Arc. It will strengthen the campaign’s operation by bringing an already organized group of people to them. At the same time, it gives us power over those who were elected, providing some clout and thereby making it possible for us to influence their votes and policymaking.

Next steps are working with LICET (Long Island Civic Engagement Table) prior to the June 23rd primary, to help get out the vote. After the primary, we will select the campaign(s) that align with our progressive values, in addition to evaluating the campaigns on the strategic value of their particular race. 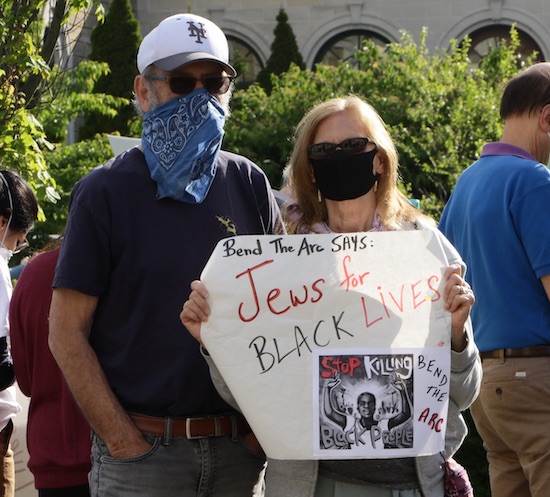 On May 21, Bend the Arc members met with State Senator Kaplan and her staff via Zoom. A number of pressing issues were addressed during that meeting.

Joanne addressed bail reform rollback, which will affect thousands of New Yorkers who will be unnecessarily incarcerated. These rollbacks go into effect in July when the pandemic will continue to be a problem. Senator Kaplan said that the reforms were not completely rolled back. However, adjustments were made that, she said, will help keep communities safe.

Cantor Eric spoke about the need for an increase in clemencies for the incarcerated. He pointed out that 70% of the women in Riker’s are simply awaiting trial and, to make matters worse, are not given sufficient PPE (Personal Protective Equipment). He then spoke about conditions in the Nassau County jails and asked the senator if she could push County Executive Curran and the legislature to make sure that both jail personnel and prisoners have sufficient PPE and, for the prisoners to have the ability to quarantine if necessary. Senator Kaplan said she is on-board with all of these measures. However, New York, like other states, is still plagued with shortages of PPE. She’s hoping to address that problem as chair of the Commerce, Economic Development and Small Business Committee.

Jeanette spoke about the need for fair and timely parole. This would ensure parole release for those who had already served a substantial amount of their time, with special consideration for those 55 and older, since they are particularly vulnerable. In addition, this would take into consideration their record in prison. The senator said that she’s comfortable with allowing judges to make these decisions.

Judy spoke about HALT, the "Humane Alternatives to Long-Term Solitary Confinement" Act. According to the U.N., solitary confinement that lasts more than 14 days is considered a form of torture. The senator pointed out that that she’s one of the cosponsors of a bill that restricts the use of solitary confinement.