What would happen if one woman told the truth about her life? The world would split open. — Muriel Rukeyser (American Poet, 1913–1980)

This has been a summer like no other. We’ve had the hottest days on record. We’ve had some of the largest protests on record. And we’ve had the most exciting political development with the selection of Senator Kamala Harris as the vice-presidential nominee on the Democratic ticket. Born to immigrant parents, it was through hard work, education, and the help of key civil rights laws that made it possible for her to be our likely next vice-president. Her appearance on the ticket for the nation’s second highest office provides important representation for women and people of color.

Bend the Arc: Jewish Action Long Island has also worked hard to provide a voice for those who have been ignored for too long. The chapter has done this through direct actions, such as the recent Tisha B’av vigil we held in Mineola, through meetings with key local legislators, through phone banking and text banking, and through partnerships with groups whose values are aligned with ours. We’ve already seen that we can move the needle. However, there’s more to be done. We welcome all of you to join us. Your participation will make a difference.

The July Community Meeting focused on our campaign to educate ourselves and our community about the Defund Police Movement. The campaign’s aim is about divesting money from police budgets and reinvesting it in social and human services to reimagine and transform what public safety looks like. We realize that an important first step is to educate the public about the need to reimagine policing on Long Island. It was decided that, as a first step, our chapter should schedule a Tisha B’Av public mourning ritual event with the goal of coming together as Jews for Black Lives. In addition, the chapter will be planning educational events that can be hosted at synagogues and JCCs.

Finally, as part of our campaign, our chapter has partnered with New York Communities for Change (NYCC), an organization that has been actively working on this issue. Currently, NYCC is pressuring Long Island legislators to take the money they’ve received from police unions and to reinvest it in Black-led community organizations. 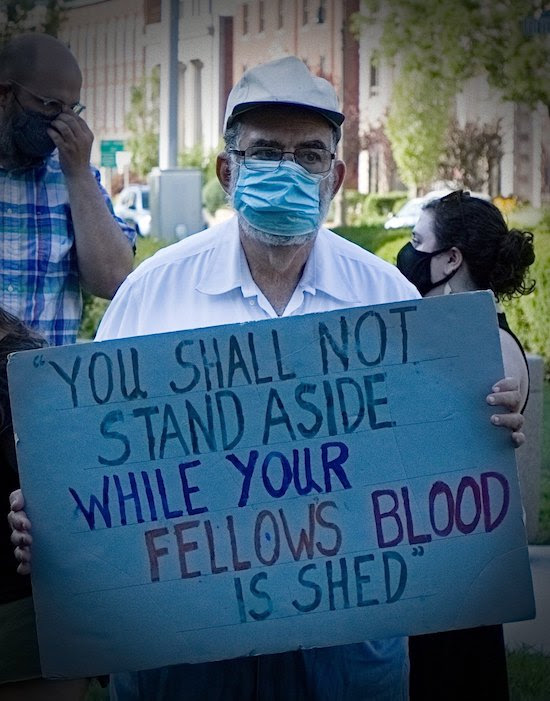 On the evening of July 29, chapter members and allies gathered in front of the Nassau County Police Department in Mineola to express solidarity with the Black Lives Matter movement, to protest for racial justice, and mourn those killed as a result of racially biased policing. We recommitted to taking action to dismantle the institutions that uphold systemic anti-Black racism.

The event coincided with the Jewish observance of Tisha B’Av, a solemn day of mourning. Attendees made speeches, sang songs, and read prayers and poems. Pieces included Unateneh Tokef for Black Lives by Imani Chapman which recounts some of the names of those who have lost their lives, and a modified Mourner’s Kaddish that included victims’ names after each line of the prayer.

This year’s entire event is available for viewing on our chapter's Facebook page.

This was the second Tisha B’Av event held in Mineola. In 2018, our chapter engaged in an action aimed at pressuring Laura Curran to sever ties between the Nassau County Police and ICE.

If you’re reading this newsletter, you already have an interest in politics, so you won’t want to miss our August Community Meeting, happening TONIGHT (August 19). It will focus on the chapter’s electoral strategy. This is your opportunity to help make this happen.